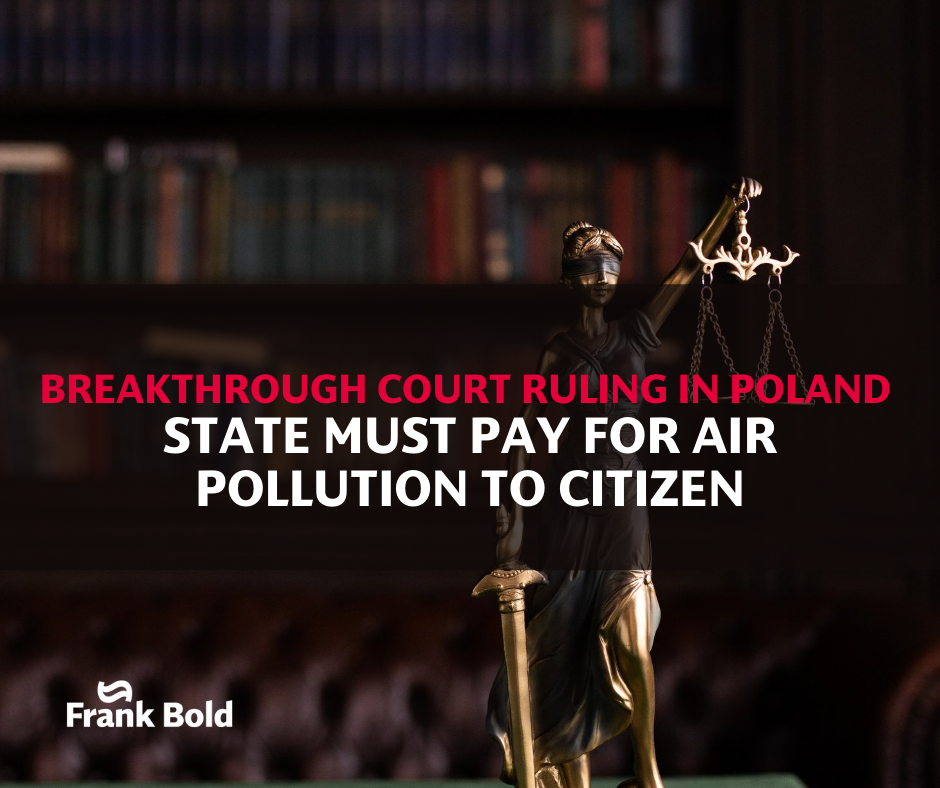 The Regional Court in Gliwice, Poland today confirmed that the state is liable for its failure to attain the European Union air quality standards and awarded the claimant amount of 30 000 pln (6 500 EUR) in damages. The verdict comes after the citizen of Polish town Rybnik Oliwer Palarz living in an extremely polluted environment after years of fighting the situation locally sued the Polish state for violating his basic rights. The ruling is the unprecedented case of supporting the rights of citizens harmed by air pollution. Frank Bold initiated the case 6 years ago.

Frank Bold Poland attorney Miłosz Jakubowski representing the claimant: “This is an important victory for people living in heavily polluted areas. This ruling sends the strong message: air quality limit values are there to protect people’s health and quality of life, they need to be followed without any exemptions. Authorities responsible for failure to attain these limit values have to compensate for any loss caused by air pollution. As the situation with air pollution is very bad in Poland we expect more court cases to rise after this precedent judgment.”

Mr Palarz is an activist of the Polish Smog Alert – a nation-wide network of NGOs and grassroots fighting against air pollution. Back in 2015 he decided to start the court battle: “This ruling is very satisfactory for me and my family. I try to follow the recommendations on how to avoid the pollution and as a result I am a prisoner of my own house. Even though some laws were improved during our court case, the levels of air pollution remain extremely high and there has been no significant improvement in our everyday lives. I hope this result will help to move things forward and force the authorities to implement more effective air protection measures and policies. I just hope that one day we will be able to go outside during the winter without fearing for our lives.”

The claim was filed to the court in 2015. In 2018 the district court in Rybnik dismissed the claim, but Mr Palarz decided to file an appeal. Today’s judgment is final and binding. It is worth noting that the claimant was supported by the Polish Ombudsman who decided to join the case.

Poland experiences one of the highest levels of air pollution in the EU. The concentrations of particulate matter and cancerogenic benzo(a)pyrene are extremely high especially in the southern regions, including Rybnik. EEA indicates that in 2019 almost 40 000 premature deaths were attributable to the PM2,5 pollution in Poland[1]. The main cause of air pollution throughout the country is burning coal and biomass in individual boilers and stoves used for household heating, hence the pollution levels are the highest during the winter. For many years the state authorities cared little about the problem. In February 2018 the Court of Justice of the European Union ruled that Poland infringed the EU law on ambient air quality[2]. Since then some improvements were adopted however these measures are not sufficient and the air pollution levels remain very high. In addition to PM10 one, the European Commission is currently conducting more infringement procedures against Poland pertaining to air pollution, including the nitrogen dioxide[3] and access to justice cases[4].

This website uses cookies to improve your experience while you navigate through the website. Out of these, the cookies that are categorized as necessary are stored on your browser as they are essential for the working of basic functionalities of the website. We also use third-party cookies that help us analyze and understand how you use this website. These cookies will be stored in your browser only with your consent. You also have the option to opt-out of these cookies. But opting out of some of these cookies may affect your browsing experience.
Necessary Always Enabled
Necessary cookies are absolutely essential for the website to function properly. This category only includes cookies that ensures basic functionalities and security features of the website. These cookies do not store any personal information.
Non-necessary
Any cookies that may not be particularly necessary for the website to function and is used specifically to collect user personal data via analytics, ads, other embedded contents are termed as non-necessary cookies. It is mandatory to procure user consent prior to running these cookies on your website.
SAVE & ACCEPT